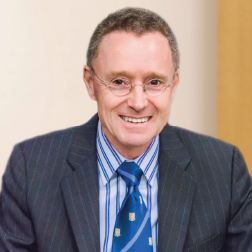 Professor Ian Holliday is the Vice-President and Pro-Vice-Chancellor (Teaching and Learning) of the University of Hong Kong. He is responsible for setting the direction and policy for the University’s curriculum, teaching and learning, and quality assurance of undergraduate and postgraduate curricula.

Professor Ian Holliday read for a BA/MA in Social and Political Studies at Gonville and Caius College, Cambridge, graduating with first-class honours in 1982. He then moved to New College, Oxford, graduating with an MPhil in Politics in 1984 and a DPhil in Politics in 1989. From 1990 to 1999, he taught at the Department of Government, University of Manchester. In 1996-97, he was a Fulbright Scholar at the Robert F. Wagner Graduate School of Public Service, New York University. In 1999, he joined City University of Hong Kong, serving as Head of Public and Social Administration from 2000 to 2004, and as Dean of Humanities and Social Sciences from 2004 to 2006. In 2006, he came to the University of Hong Kong for a five-year term as Dean of Social Sciences. Since January 2015, he has been Vice-President and Pro-Vice-Chancellor (Teaching and Learning).

For most of his time in Hong Kong, Professor Holliday’s research has focused on Myanmar politics and governance. He is the author of more than 100 academic publications, including the book Burma Redux: Global Justice and the Quest for Political Reform in Myanmar, published by Columbia University Press in 2011. He was founding co-editor of Party Politics and the Journal of Asian Public Policy and relaunch editor of Contemporary Politics, and serves on the editorial boards of about a dozen international journals. From 2007 to 2014, he organized or co-organized an annual series of research symposia on Myanmar. In 2013-14, he was a member of a small group of foreign scholars who worked with professors from Mandalay University and the University of Yangon to create a political science curriculum for Myanmar.

Professor Holliday is passionate about teaching and learning. As Dean of Social Sciences, he spearheaded the introduction of a graduation requirement that undergraduate students complete off-campus credits in the twin areas of social innovation and global citizenship. He also created, and until 2014 directed, the Faculty’s MOEI programme. Launched on the Thai-Myanmar border in 2008, and today operating in Cambodia, Myanmar and Thailand, MOEI enables undergraduate students from the University of Hong Kong and its global partners to deliver intensive-mode English classes to children and young adults in impoverished and marginalized communities. Across seven cycles from 2008 to 2014, more than 300 MOEI students taught English to many thousands of young Southeast Asians.